Persons who feel they have encountered an incident(s) where they have been discriminated or harassed under the Code, may file an application with the HRTO. Click the image below to see a brief presentation on the Human Right Tribunal of Ontario which explains the purpose of the HRTO as well as the process and procedures. 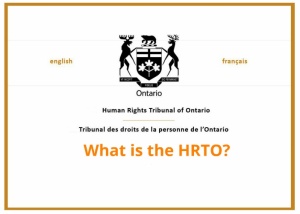 Whether or not the Dixons were denied the transfer to a ground floor apartment based on their receipt of public assistance, and/or Mr. Dixon’s disability.

The landlord’s representative, Mr. Sablatnig, testified that the refusal of the ground floor apartment was because he believed Mr. Dixon’s wheelchair had contributed to damage in their unit for which the applicants were unable to compensate the landlord.  He estimated the damage to be approximately $5,000-$6,000.  He stated he did not discuss the damages to the apartment with the Dixons or ask if they would pay for repairs.  “They are receiving social assistance– we could not ask for a refund– social assistance does not do that”.  He testified he also believed “…any new apartment would suffer a similar damage”.  Based on photographs of the damage submitted by the Dixons, the Tribunal found Mr. Sablatnig’s estimate to be “grossly exaggerated”.  The Dixons stated that if the matter had been brought to their attention they would have repaired any damages to the apartment prior to moving.  During the time the Dixons were requesting transfers, Mrs. Dixon stated there were at least 3 internal transfers in the building.  Mr. Sablatnig testified that “one tenant receiving a transfer used an electric wheelchair, and another has a walker”. The Tribunal stated, “Proof of absence of discriminatory behaviour in one instance cannot of itself establish that this behaviour is never demonstrated with others; Direk v. Coffee Time Donuts, 2009 HRTO 1887 (CanLII).  The adjudicator stated management believed they were in a better position to make decisions for the Dixons based on the fact they were on social assistance and could not afford to compensate the landlord for any damages, so the matter of compensation was never brought to their attention and therefore, the request for a transfer denied.  Management had also decided Mr. Dixon’s wheelchair would damage the new apartment, another reason for the refusal of the transfer. The Dixons were therefore denied a transfer to the ground floor apartment because of their receipt of public assistance and Mr. Dixon’s disability.